I entered this one as my better half was planning to be out of town that day and it would be somewhere new for a long training run, and the nature of the trail would be good prep for the #Edinburgh24 race in July. Saturday would be spent in town and I’d drive out early on Sunday morning.

The course was a 6.55 mile out and back on a tarmaced rail trail. The trail winds gradually uphill for about 5 of those miles before falling slightly towards the turn around point.

Having run a hilly 50 mile race and a 10 miler the previous weekend I had a relatively easy week , around 20 miles over Tuesday to Friday. Saturday was spent cycling leisurely around DC looking at apartments. On Saturday night I was still undecided as to whether to race for a time or run based on feel. I had no idea how my legs would feel particularly in the second half of the race given the previous weekends activities so decided to just run on feel and see how things went.

I opted for my relatively new Altra Instinct 4.0s as a light cushioned race shoe and would run with a belt to hold my gels (and phone), relying on aid stations for liquids.

Breakfast consisted of a PB&J bagel as usual and a sticky bun on the 2 hour drive to Hancock (yes I have a weakness for baked godos), and can of coconut water. For a change I also only had ½ a cup of decaf coffee before leaving the house. Parking was a short walk from packet pick up and the race start and there was plenty of it. The staggered start times for the marathon and half marathon meant there were only short queues for the Portajohns.

I had my usual banana as I picked up my race number and drank a UCAN starch drink which I had tried before and found to be a great pre-race fuel. I then did a short loop along the canal to loosen my legs after the drive.

The race briefing was held by the yellow barriers that marked the start line (Barkley marathons….). It’s a small race so there were no individual timing chips and time would be gun time. Having looked at the previous years results, I figured a 3:10 would put me well within the top 10 so I lined up at the front.

After a short race briefing (the main point being to turn around at the turn around point!) we were off. Adam shot into a lead straight away and I let him go knowing that he had run 2:45 the previous year. I fell in with a group of 4-5 other runners on a sub 3:10 pace and we worked together over the first few miles. On the steeper section (slightly so) around mile 3-4 the group drifted apart until it was me and another runner who I paced to the turnaround (with only occasional glances at my watch to check pace) in around 46 minutes. I felt good and knew that I would go a bit faster on the way back. I got some pacing on the first part of the return leg but pulled away towards the top of the uphill and ran the downhill on my own. I felt comfortable and my legs felt ok but the test would be the next uphill. Passing other marathon runners and the half marathon runners on the way back down which helped to pass the time.

I got to the start line in 1:31 which put me in great place to go for a PR if my legs held out. As I turned I was able to see the runners in 3rd and 4th who weren’t far behind me, and this was reinforced when the race director announced “..the race was on for the podium places!”

I decided to push on a bit on the uphill to test the legs. If they didn’t last the 13 miles, it would be good practice running on tired legs for the Edinburgh 24 race in July. Again passing runners coming the other way and exchanging encouragement helped to spur me on as the trail steepened. I could feel that I was working but didn’t feel like I was red lining yet. I got to the turn around in about 2:15 so knew things were looking promising as I was still feeling good but needed a calculated push so as not to blow up. I pushed on the uphill and then relaxed and let myself go on the downhill. My legs were tiring and it became a mental challenge of pushing through each mile at a time. I was checking the watch more regularly as well and trying to do the pace calculations (ie if I put in another mile at this pace, I can still PR if I slow by a minute over the last couple of miles). I stopped briefly at each of the three aid stations on the way back to grab a quick drink as it was starting to warm up. Coming off the downhill and onto the flatter section I knew that I was looking at a PR and a first sub-3 hour marathon even though my pace slowed slightly as fatigue was catching up with me.

I crossed the line in 2:58:14, a PR by 2 mins 43 seconds, almost a year to the day that I ran 3:00:57 in Boston. And it was a big negative split with the final 6.2 miles run in 40:50 (with some assistance from gravity!) I felt good considering and after a walk to the car for a dry top, I had a protein shake whilst cheering in other runners and talking to the volunteers, then did another short loop along the canal as a warm down before the drive back to DC.

This race re-emphasized the advantage of running on feel rather than getting carried away focusing on pace.

I do better at races when I’m relaxed and focused on running, not when I’m hyped up and focusing on a goal time. 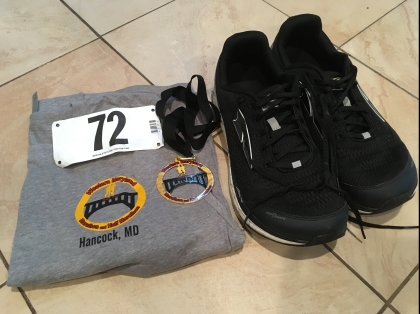 Blog posts are in date order. The numbers reflect the count of marathons / ultras completed.