This race fell on a day that I had free and was close enough to drive to on the day, even with the 6am race start time (to beat the heat). I had never been to York so was looking forward to the excuse to visit. The course started in the city center and was 13 miles out and back along a rail trail, so fairly flat with only very gradual inclines and declines, nothing like the climb at the Western Maryland Rail Trail Marathon.

This would be the last long run at the end of a big training block for #Edinburgh24 so I wasn’t planning to go for a PR. The aim was to take it steady in the first half and run a negative split. A sub 3:10 time would be nice, as would a BQ but that was secondary and would depend how I felt, and after last weekend, how hot it got.

We met up with friends for dinner the night before which wasn’t the best preparation. The food was lovely but a bit rich for pre-race fuelling and it meant later to bed than would have been ideal.

The 6am race start meant being up before 3 and leaving by 3:20. I had a PB&J bagel and a savory pastry on the 2 hour drive. Parking was easy to find and close to registration (at the York YMCA). I used the restrooms and then did a short run through the streets to stretch my legs after the drive.

The race briefing was held on the steps of the YMCA, followed by the singing of the National Anthem.

The marathon started first with the half marathon runners following 15 minutes later (which meant I only caught the slower runners in the last few miles.

I lined up near the front but with maybe 40 people in front of me and tried to focus on my own pace from the gun. I passed several people in the first part of the race (through the streets to the rail trail), and from there it settled down. I was maybe in 25th and could see groups ahead of me but just focused on my pace, knowing that there were plenty of miles to reel people in.

The course is beautiful, lots of tree cover and lots of farmland with a morning mist covering parts of it on the way out. There was plenty of wildlife to cause distractions as well including groundhog, chipmunks and vultures (picking over a dead deer not a runner!).

By mile 8 I had moved up into 10th but had to take a bathroom break, which added a couple of minutes onto my outward time. There was good support along the route as the rail trail crossed roads in several places, each of which was well marshalled. The aid stations were well spaced and plentiful, all with gatorade and water.

The unplanned stop dropped me back down the field but mentally I was able to use the runners ahead of me to keep me focused on a decent pace.

I reached the turn around at roughly 13.1 miles in 1:34 so a perfect pace based on my goal. The nature of the course also meant I could count how many people were ahead of me – 14. I intended to push a bit on the way back but planned a similar strategy to other recent marathons where I’d sped up a bit for 13-20 and then pushed hard for the last 6.

I was still picking up places and feeling good, physically and mentally. It was getting warmer but nothing like the previous weekend, and the tree lined trail was providing shade. By mile 20 I was up into 8th place and still feeling good. I knew I wasn’t going to PR but stayed focused on my goal, and a sub 3:05 was starting to look likely. There were runners in the distance so I used them as a focus to keep the pace up as I pushed the last 10k. I was also catching half marathoners at this point.

With 2 miles to go, I hadn’t gained much ground on the runners in front of me but as I pushed harder I started to catch them, passing 2 runners with just over a mile to go and another runner with less than half a mile to go and I was still feeling strong. The support on the final section through the city (still on the rail trail) was great and encouraged me to carry on pushing the pace.

After crossing the finish line, I received my medal and waited for a couple of other finishers to come through. I grabbed a bit of bagel and a chocolate milk from the food tent, then did a gentle jog along the high street before heading back to the car and then onto the showers in the YMCA.

The results were posted regularly at the finish so I had seen that I had finished in 5th place and was first in my age group so hung around for the award ceremony and partook in the sandwich buffet in the YMCA sports hall.

Nutrition: Clif Shot bloks consumed from miles 6 to 14. Gel at mile 18 and 22. Water at and gatorade at aid stations.

York, PA and the countryside around is lovely. Definitely somewhere to go back to. 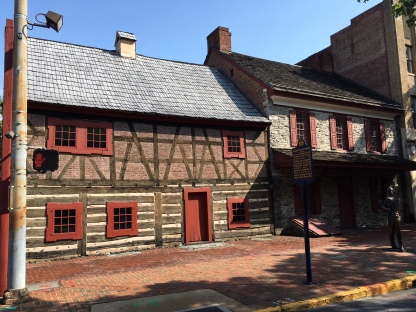 More good mental practise – not going out to hard and breaking the race up into sections (which will be very important for #Edinburgh24).

Don’t eat rich food the night before a goal race!!

Blog posts are in date order. The numbers reflect the count of marathons / ultras completed.